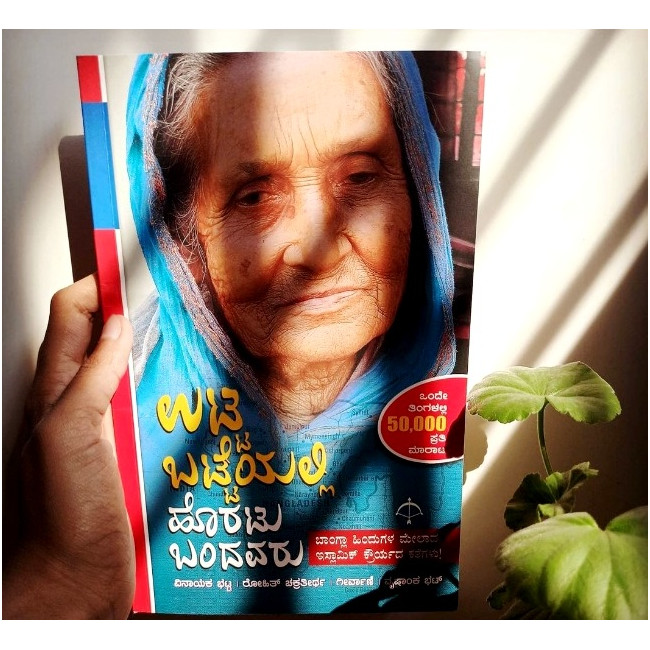 ‘Utta Batteyalli Horatu Bandavaru’ is just 96 pages but it has the stories that would churn your stomachs, wet your eyes and wrench your hearts. Yeah, this is the book that speaks the untold experiences of the Bangla Hindus who were forced to leave their homes during the 1970s.

Writers like Rohith Chakratheertha, Vrishank Bhat, Geervani and Vinayak Bhat met these Bangla Hindus who were given refugee in Sindhnoor, a place in Raichur of Karnataka and further compiled their heart throbbing stories into a short book indicating the importance of Citizenship Amendment. The foreword is written by Setu Ram ji, one of the prominent Kannada writers, who sensitively addresses and introduces the reader into the horrors that were forced upon these people.

This book consists the recollections of those victims who watched their neighbours killed by gunshots, friends raped and murdered. These victims were forced to leave their homes overnight with nothing but just clothes on them. Even the ones who assured them to help them reach the Indian borders turned out to be just opportunists. What the Bangla Hindus went through is even hard to imagine. I wonder why this part of Hindu Genocide stays in darkness away from the general population’s awareness. Their lands and houses were encroached, wives and daughters were raped and murdered, their breasts were cut off, children’s throats were slit too. All this happened because the inhumane Pakistan and its political interests! What was worse, which I found really hard to swallow was, they weren’t allowed to stay in their places nor could they reach India without getting shot by the armed men standing. It’s too much to talk about, only one can read the book and get the whole picture.

The Indians and the Indian police at the borders welcomed and hugged the victims to their chests with love feeling the tremble of these victims who were thrown out from their own house! A portion of them are living in Raichur’s Sindhnoor. It was initially hard for them, with the memory of motherland clawing at them yet they expressed the relief and gratefulness they have for the people here.

Bangla Hindus became victims to the fanatic ideologies and political interests. I could hardly imagine what they went through. It was an intense and heart heaving read. I’d love to meet them once, hold them tight and let them know that their stories won’t be forgotten. I am not sure if they can go back or if they would be safe there even if they go but I’d like to tell them that they’re one of us and they’re never ever outsiders. This book must be read by everyone. As the last chapter entitles ‘One should know the history but shouldn’t become radicalised’ everyone should know what happened but that should always help us protective of humanity rather than build walls. I’m so grateful to the writers for giving us this work with the stories, otherwise unheard of neglected, so we could understand the heinous face of atrocities.

This book is translated into English with the title ‘The Genocide That Was Never Told’ and into Hindi with the title ‘Jaise The Vaise Chale Aaye’. Please do read them. We can’t change the past but we could at least help their generations to live better and safe away from all the horrors they had go to through. My naman to all the Bangla Hindus who resisted the atrocities, I’m forever feel awe at their strong will. Jai Hind, Jai Siya Ram.